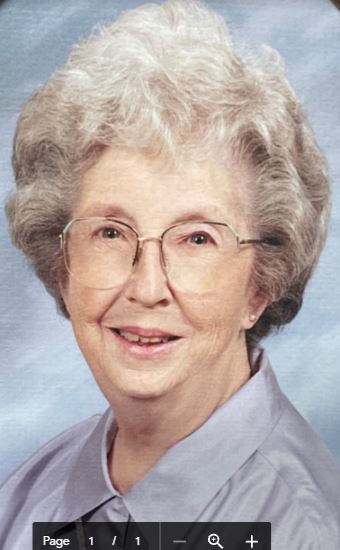 Leota Marie Garrett, was born in Shamrock Texas 17th of May 1926, the youngest child of Florence Tate and Irene Emmaline (Mixon) Garrett’s four Children, as Edna was born in 1913, Artemas 1915, and Arlon 1919; who all preceded her in death.

Leota married her childhood sweetheart Edwin J Beasley, 4th of April 1948, in Plainview Texas. Soon after marriage, Edwin was recalled into service in the Marine Corps and that took the young couple to Washington D.C. where they both worked in defense of Liberty, Edwin at the Naval Annex and Leota at the Pentagon Complex. In the Spring of 1950, Edwin was ordered to Camp Pendleton to train Marine recruits, and Leota was pregnant with her first child. Leota returned to Texas aboard commercial air flight while Edwin drove their 1948 Oldsmobile, home to Plainview, on leave from D.C., before leaving for Camp Pendleton.

After Gary was born, Edwin left for Camp Pendleton and Vista, California where Leota and Gary would join him after a few months. A year later, in 1951, Leota and Gary returned to Amarillo, Texas and Edwin joined them several months later in early 1952, after being discharged from the Marines.

Linda was born in 1953 and soon after Leota and Edwin moved their family to Los Alamos New Mexico, while it was still a city behind a gate! Badge in, Badge out was the norm while Dad was on the guard force. A couple years later and a move to Albuquerque, and in 1957, Leota and Edwin returned to Amarillo, and a permanent home for the remainder of their lives. Carol was born in 1960 to complete the family. Edwin retired from Pantex in 1982 and Leota retired from Nunn Electric in 1992 after 27 years of service to Nunn.

Leota and Edwin built a home on Kingston Road in 1966, where they both remained living until their respective death. Edwin preceded Leota in death in 2001. Also, preceding in death, daughter, Linda Beasley (deceased 2018) and a granddaughter Jennifer Nations (deceased 2018.)

Leota quietly and peacefully passed away, subsequent to a recent fall at home, on the 21st October 2021, at BSA of the Southwest Hospice, the Arbors, at approximately 2:30 in the afternoon, in the presence of her son and daughter-in-law, Gary Beasley and his wife Debra.

She is also survived by two nieces Patty Gritzfeld, and Nanette Sever; three nephews, Don Garrett, Keeton Johnston and Joe Bob Garrett, and many other relatives, friends and associates whom she loved dearly, and will miss her more. God Bless You All!

Mom’s Legacy Run’s Deep
Our Mother, Leota Marie Garrett, was born in Shamrock Texas on the 17 th
of May 1926. She was the youngest child of Florence Tate (Doc) and Irene
Emmaline (Mixon) Garrett’s four Children, as Edna was born in 1913,
Artemas 1915, and Arlon 1919. The family was industrious and well cared
for, were never wealthy, but much better off than many families during the
late twenties and into the years of “The Great Depression”.
Mom’s family were dairy farmers and lived just West of Shamrock, where
they milked Jersey cows and distributed milk in Shamrock and the
surrounding area. They valued quality over quantity and produced superior
milk and other milk products for their customers. A Model-T truck was
used during many of the years that they did business. Deliveries were made
by a couple of delivery boys as the truck made pace down the streets of
town. Everyone at home help in the milking and packaging of the milk
produced by those fine Jersey cows.
Mom had few playmates while growing up, except the chickens in the yard,
of which she grew fond and attached, so much so, that to the end of her
days, she did not like to eat chicken! She had great imagination and
resilience to the loneliness of a child with few playmates of her own age,
while she grew up! Until she entered school, she was often left to her own
devices. She was creative and never really alone, because she had
imagination and a great family whom all really cared for their much
younger sibling and offspring!
As a young girl, before she was seven years old, her brother Arlon died as
the result of a ruptured appendix. That impressionable event, resulted in
her extremely responsive attention to our aches and pains for me and my
siblings as we grew up in her care! I wouldn’t say that she was over
protective, but that she was compelled to visit our hurts with great and
responsive care! So, how many of you have ever had your throat swabbed
with mercurochrome, been given aspirin as a throat lozenge for a fever, an
enema just because you looked weak or just because your cousin had just
gotten one, had your chest rubbed with Vicks and the room vaporized, or
even been given a hot-toddy, of lemon, honey and whiskey that wasn’t out
of the question if your chest was congested. I’d say that she was a darned
good nurse and a terrific mother!

Mother met Dad, Edwin J Beasley, when he was fourteen or fifteen and
began working for my grandfather, as a delivery boy on the milk route.
Mother was only twelve or thirteen at the time. Their friendship,
admiration and love would grow over time and after a steady stream of
correspondence between Mother and Dad during World War II, while he
served as a Marine. Mom and Dad’s love would culminate in his proposal of
marriage, after those war years, in late 1947 or early 1948. Dad was learning
to fly a plane as a student pilot, taking lessons when living in Ft. Worth as
he was working for McDonald-Douglass. On one of his solo flights, he
logged a trip from Ft. Worth to Lubbock in November 1947, and made the
trip to visit Mother and her family in Plainview, where they had moved
sometime after the war. I’m not sure when he proposed, but they married
on the 4th April 1948, and to my knowledge, Dad never flew a plane after
that time, as his flight log book remained blank.
After their marriage, Dad was called back into the Marine Corps and he and
Mother worked in the Washington D.C. area, Dad worked at the Naval
Annex, as a Marine Staff Sgt. with Colonel Sandifer (Sandy) Hunt, a friend
for life, from the III Marine, III Amphibious Corps, Signal Battalion. I
believe that mother was doing some secretarial and bookkeeping type work
at the Pentagon complex. Mom and Dad lived in Arlington Virginia and also
in McClain Virginia while in the D.C. area.

During their time in D.C. and Virginia, their first child Gary was conceived,
and as Dad was being returned to Camp Pendleton, in California where he
became a trainer for new recruits. Mother flew home to Texas as Dad drove
from D.C., to home in Plainview. Gary was born in Plainview Texas in May
of 1950. Dad soon finished his trip to the West Coast and Camp Pendleton,
while Mother and Gary joined him a few of months later, sometime after
October 1950. Mother, Dad and Gary lived in Vista California for
approximately a year before Mother and Gary returned to Texas.
Mother’s parents had moved from Plainview, to farm just East of Amarillo
along the south side of Highway 287. Leota and Gary lived with them and
they all went to church at Polk Street Methodist, that would have been in
1951. Dad returned to Texas in early 1952 after his discharge from the
Marine Corps, but he remained a reserve until the mid 1960’s..

Dad worked a few months for Southwestern Bell, stringing wire, as he had
done in the Marines, before becoming a guard at Pantex. Mother began
bookkeeping at Amarillo Air Force Base. At that time, they lived on the last
street, in far East Amarillo, when Linda Gay was born to Mom and Dad in
July 1953.
Mom and Dad moved the family to Los Alamos, New Mexico, where he was
on the guard force and Mother then began to be a full-time mother, which
pleased her young children. Mother nurtured them well, and taught them
many things. Mothering seemed to be a contentment for our mother and
she did it very well.
After a couple of job changes for Dad and couple of moves, Los Alamos to
Albuquerque, Albuquerque back to Amarillo in 1957, we were settled in
Amarillo for the past sixty-five years. Mother birthed Carol Ann on the 26 th
February 1960 in an ice storm. Mom was still a full-time Mother, and not
until approximately late 1963 did she return to working part-time at W.T.
Grant’s department store near N.E. 24 th and Grand.
Mother took a job as a Kelley-Girl at Nunn Electric in 1965, and Nunn liked
her so well, they offered her full-time employment, where she worked until
her retirement after more than twenty-seven years. She made many friends
through her work and was well liked by all, including the long-time owners
of Nunn, the Hare’s.
Mother continued to nurture her children and bring them up as Christian
young men and women. Polk Street Methodist church was home for all of
us. Mother was active with Methodist Women and had many special friends
from her Sunday School Friendship Class. Mother remained active at
church for many years, and She and Dad were blessed with many church
friends. Mother and Dad celebrated their Fiftieth wedding anniversary in
1998, with family and friends from work and Sunday School.
Over the years mother and Dad traveled all around the country to enjoy his
Marine Unit’s reunions and they hosted a couple of those great reunions of
the III Marines, III Amphibious Corps, right here in Amarillo, for which we
are all eternally grateful! Semper Fi

Mother lost her husband, Edwin J Beasley, on 1 January 2001, and has
remained Mom alone since then, until her passing last week. Mom loved us,
encouraged us, nurtured and fed us well all of our lives. We will miss our
sweet Mother, Leota Marie Garrett Beasley, until we are reunited with her
again in Heaven.
Mother is survived by two of her Children, Gary Lynn Beasley and Carol
Ann Weeks and their respective spouses, many grandchildren and great
grandchildren and more than a few great-great grandchildren, nieces and
nephews.

With Our Love and Warmest Regards,
The Beasley’s