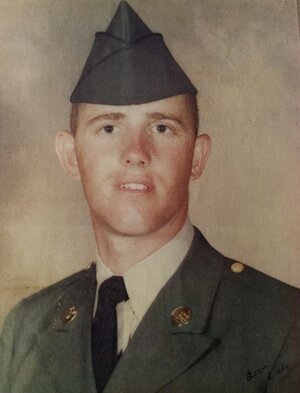 Dale Franklin Brenizer, 73, of Amarillo Texas, passed away peacefully at his home surrounded by loved ones on Wednesday, June 24th, 2020.

Dale grew up in the Midwest and he was the youngest son of Earl Sr and Mabel Brenizer of Grantsburg, Wi. Dale, along with four of the Brenizer sons, served his country over sees in the Army from 1966-1969. He graduated from Grantsburg High school in 1965. Dale’s passion in life was a Love for Antiques and Auctions along with his family and friends.

He married his wife Linda on April 4th, 1970 and they just celebrated their 50th wedding anniversary this year. Together they would travel all over the United States to find rare treasures of antiques and collectibles at local auctions, flea markets and antique shops. For over 22 years, Dale owned and operated a booth at the Tee Anchor Flea Market with his business partner John.

Dale was all about his family. Together with is wife Linda, they raised 2 children, Gretchen and Brandon both of Amarillo, Texas, along with “adopting” over the years more sons and daughters- Scott (Tara), Peter (Anita), Lee, Christina and Michelle (Kipper) along with several friends who became a part of his extended family. Dale was loved by many who knew him simply as “Pops”. He was also a grandpa to over 20 grandchildren and 25 great grandchildren.

Dale is proceeded in death by his parents, Earl Sr and Mabel, his brothers Laverne, Robert, Donald, Russell, William, Earl Jr and his sisters Darlene and Violet.

He is survived by his wife Linda and his children, Gretchen, Brandon, Scott (Tara) of Amarillo, Peter (Anita), Christina, and Michelle (Kipper) of Canyon, Texas, and Lee of Cumberland, WI, along with his brothers Leroy (Phyllis) of Frederic, WI, Delroy (Linda) of Hopewell, VA, Charlie (Sandy) of Loveland, CO, Richard of Siren, WI and 2 sisters, Kathy and Shirley both of Grantsburg,WI. Along with 20 grandchildren and 25 great grandchildren, family and close friends.

A Military Memorial service will be held on Thursday, July 16th, 2020 at the Hillside Christian Church NW Campus, 600 Tascosa Rd. Amarillo Texas, at 11 am and his ashes will be buried at Wolf Creek Cemetery in St. Croix Falls, WI next spring.