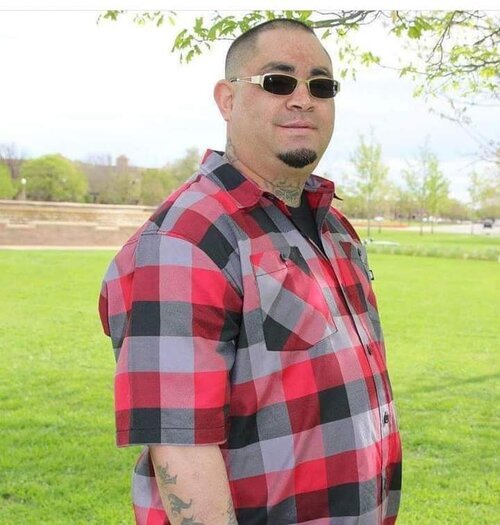 Funeral services are scheduled for 10:00 a.m. on Friday, August 21, 2020 at New Life Church, 406 Pittsburg Street in Amarillo, with Spike Maldonado officiating. Interment will follow at Llano Cemetery. Arrangements are under the personal care of Lighthouse Funeral and Cremation Services.

The family will receive visitors at the Church on Thursday evening from 6:00-8:00 p.m.

Eric was born on April 20, 1981, in Amarillo Texas to Donna and Pedro Flores. He grew up in the barrios of Amarillo, where he made lifelong friends. He moved to Lubbock in 2013, where he encountered more friendships, that were like family to him. He was very creative and he became a welder. He also loved to tattoo. Eric was free-spirited and a jokester. He was a great father to his kids and ”the most real” person you would ever meet. He had a smile that lit up a room and he was a man with the biggest heart. He loved riding his motorcycle and spending his days with his dogs, Milo and Zoey. He touched the hearts of those who knew him. He was very proud of his kids, his brothers and sisters. He made every effort to keep in touch with the people he loved. Eric was loved by many and will be deeply missed by all who knew him.

Eric was preceded by his grandfather, “Apa” Alfredo Flores and a nephew, Eric Elijiah Grinie.

Those left to cherish his memory are his parents, Pedro and Donna Flores of Amarillo; his grandparents, Louisa Martinez of Amarillo, Guadalupe Martinez and his wife Alma of San Angelo, Teresa Ayala Flores from Jalisco, MX.; his daughters, Hannaka Flores, Savanah Martinez, E’liza Flores; and one son, Antonio Martinez; siblings, Angelica Flores, PJ Flores and wife Angelique, Christopher Flores and wife Sarah, Crystal Estrada and husband Jonathon all of Amarillo. Many aunts, uncles and cousins.

He is also survived by four grandchildren, Attikus, Azeleah, Zanaya and Alejandrina and many nieces and nephews.