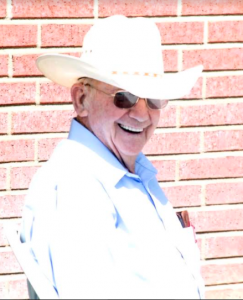 He proudly served in the United States Army. He was trained as a Radio Operator and received a Good Conduct Medal. He also received a purple heart while serving in Germany.

James married his sweetheart, Louise Marshall on September 4, 1964. They were married for 40 years until her passing in 2004. James attended Chaparral Hills Baptist Church. He will be dearly missed by his family. He loved his horses, dancing, and his family.

James was preceded in death by his parents, Fredrick and Alberta Marshall, and his beloved wife, Louise Marshall.

Those left to cherish his memory are his two daughters and their husbands, Rose and Preston Boyd of Amarillo, and Rosemarie Chapman and Steve England of Fort Worth; his son Fred Marshall and his wife Sheri of Amarillo; 7 grandchildren; 11 great-grandchildren, and his best friend and dance partner, Pat Atwood.