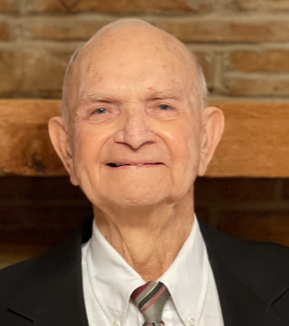 Joe Brit Adams passed away on November 16, 2021. He was born to Brit and Edna Fay (Simmons) Adams on May 21, 1935, in Stephens County, Oklahoma. He attended school at Doyle and Velma in Oklahoma.

Joe married Marianne Lacy on Sept 14, 1952. They had one son, Joe Brit Jr. Joe worked oil fields in Oklahoma. He then moved his family to Kansas where he worked for Halliburton and then farmed. Eventually, the family moved to Amarillo, Texas, where he had numerous drive-in businesses including Lil Jo’s Drive-in, Brits Drive-in, and the American Drive-In.

When an opportunity presented itself, he got out of the restaurant business and bought C and W Potato Company. Several years later, he decided to retire and move back to Duncan, Oklahoma to farm and run cattle on the old Adams homestead that he had purchased. Marianne passed away on April 27, 1984.

Joe then married Carol Carlile on April 9, 1985. He purchased Wrights Donuts and enjoyed making donuts for several years. He later joined a partnership in All-Star Ford Lincoln Mercury Dealership where he helped build the new Ford location on Hwy 81. After selling his interest in the Ford dealership, he sold real estate and began to acquire numerous rental properties. Joe was a very hardworking and generous man. He was always willing to help others. Anytime someone needed help, he was first in line. He even donated his body to Oklahoma Medical Research.

In lieu of flowers, the family requests you donate to OMRF or your favorite charity.