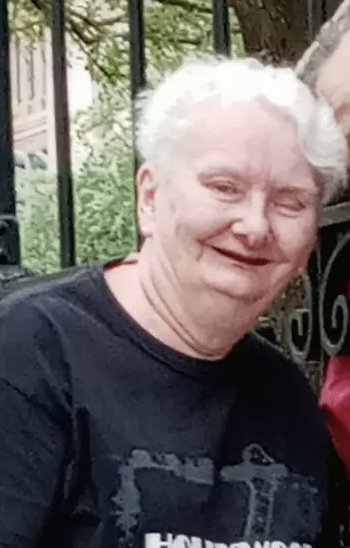 Linda Lou Brenizer (Peterson), 74 of Amarillo passed away peacefully on June 21, 2022, surrounded by her family and close friends. Linda was born April 11, 1948. She was the daughter of Margaret and Knute Anderson, and the late Gordon Peterson.

Linda, along with her three brothers, Kenneth, Gerald, and Eugene, grew up in Northwest Wisconsin, mainly the Frederic and Balsam Lake area. She graduated from Frederic High School in 1966 and went on to pursue Cosmetology. She met her husband Dale in 1969 and the two were married April 4th, 1970, in Frederic, WI. They spent 50 years together before Dale passed away in 2020. Together they would go on to own an Antique store in Siren, WI and worked together at auctions in Milltown, WI. Linda also worked as part of the Kitchen staff for AISD in Amarillo.

Dale and Linda have two children, Gretchen and Brandon, and five grandchildren and two great-grandchildren. Linda was also known as Momma and Grandma Linda to several close friends who became her extended second family.

Linda was also a huge Green Bay Packers fan and every game she would be sitting in front of the tv cheering her team on to victory. Linda also enjoyed going to Bingo with her children as their Bingo Buddy along with spending time with friends and family.

Linda is survived by her daughter and son, Gretchen and Brandon both of Amarillo, a brother Eugene (Jeanne) Peterson, of Grafton, WI, several brother and sister in laws, nieces and nephews, cousins and extended family. Also, five grandchildren, Adam (Sarah) Brenizer of Oshkosh, WI, Samantha (Jesse) Engen of Glenwood Springs, CO, Stephanie Fey (Jesse) of Jeffersonville, IN, Ethan Wesolowski, of Joliet, IL and Teralyn Brenizer of Amarillo, and two great-grandchildren, Nora and Brielle, of Oshkosh WI.

Linda is preceded in death by her parents; her husband Dale, and two brothers, Kenneth and Gerald.

Cremation services were done in Temple Tx along with funeral arrangements by Lighthouse Funeral Home in Amarillo. A Celebration of Life will be held on July 14 at 11:00 am at the Hillside Church in Amarillo. Burial for both Dale and Linda will be at Wolf Creek Cemetery in Wisconsin at a later date.