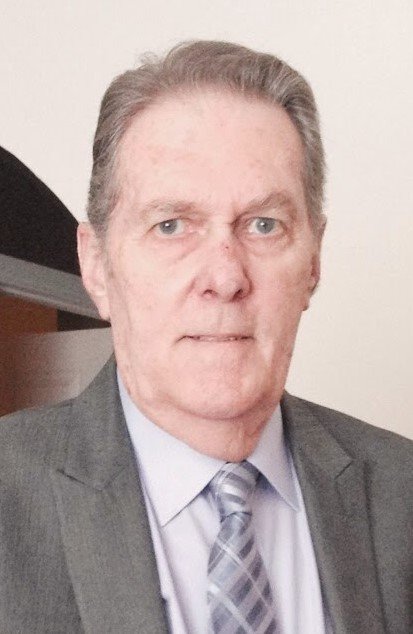 Van Kirtland Crume II passed on December 15, 2022, two days after his 78th birthday, with his wife and children by his side.

Van was born in Los Angeles on December 13, 1944, to Mary Lea Carrington Crume and Van Kirtland “Kirt” Crume. Kirt was serving in the army in Europe at the time, while Mary was staying with her sister in Los Angeles. It wasn’t until September 1945 that Kirt returned to the states and met his son.

After the war the family returned to their hometown, Farwell, Texas where Van went to school, graduating from Farwell High in 1962. Van stayed in Farwell when his parents and younger brother Tim moved to Albuquerque so he could continue college at ENMU in Portales. When his draft came due, he left college to enlist so he could choose service in the Navy. He served four years in the Navy from 1965 to 1969.

Van began dating Phyllis Kay Christian the year before he enlisted. In December 1966 he proposed to her while home on leave. They were married on May 7, 1967, while Van was again on leave. After a brief honeymoon in Ruidoso the couple packed up Phyllis’s things at her parents’ home in Farwell and drove to their first home together on Whidbey Island in Puget Sound, outside of Seattle WA, where Van was stationed.

After the Navy Van and Phyllis lived in Albuquerque where they had two children, Keralee and Chad.

Van worked at General Dynamics and traveled to places such as Hawaii, Alaska, Iceland, and Spain – often for three weeks at a time. He worked on a number of interesting experimental projects including a laser cannon mounted on a 747, high altitude flights over nuclear bomb test sites to measure radiation dispersion and atmospheric effects and tracking the flow of material through magnetic lines between North and South poles. He developed a lifelong love of seafood and would bring home oysters and king crab from Alaska. He taught his kids to appreciate oysters that he shucked in the family garage. Van and a couple of friends decided to leave GD to own and manage a gas station on the corner of Wyoming and Menaul in Albuquerque.

In 1977 the family moved from Albuquerque to Amarillo where Van started work at Southwest Public Service (now Xcel Energy). He worked as a telecommunications engineer and manager for 35 years until his retirement in 2012 at the age of 67.

Phyllis and Van divorced in 1994. Van married Del Rutherford in 2003. They lived together for the remainder of his life with their family of beloved and troublemaking cats.

Van and Del were married for almost 20 years and loved the life they had together to the end. They doted on the grandchildren and took every opportunity to be with them. “Gran-Del” and Pop-pop attended all of the school assemblies, dance/band/orchestra concerts they could – building life-long memories whenever possible. Chad and Keralee will forever be grateful for the love and commitment Del held for their dad until the end of his life.

Everyone who met Van describes him as a kind, soft-spoken man with a great laugh. He didn’t care to debate or philosophize much, preferring good stories and jokes. He quietly mentored neighborhood kids by playing catch, listening to them, and never judging. He was a man of few words, but when he spoke, he meant every word.

Van was preceded in death by his parents, Mary Lea Carrington Crume and Van Kirtland Crume. He is survived by his wife, Del Rutherford Crume; his ex-wife Phyllis; his son, Chad Crume and daughter-in-law, Marissa Zanetti-Crume; his daughter, Keralee Crume Clay, son-in-law, Tad Clay, and his two grandchildren, Liam and Eliza Clay; his brother, Tim Crume and wife Gloria, nephew, Jason Crume, and nieces, Kimberly Crume Gross and Kelli Crume Luther and their mother Kristi, as well as great-nieces and nephews; his “favorite uncle” Bill and wife Marcia, and his dearest cousin Cindy.

There will be a private, family, Graveside Service on December 26, followed by a public gathering at 3:30 at the Amarillo Unitarian Universalist Fellowship at 4901 Cornell St. in Amarillo for all that want to celebrate his life and support his family.

In lieu of flowers, the family prefers donations to nonprofit organizations that were important to Van – Veterans’ Resource Center (through Family Support Services) or Texas Panhandle 100 Club.